The image of the month for January is the largest planet in the Solar System, Jupiter. There were a series of observations of Jupiter taken in January, and it is possible to combine them all and adjust the brightness of the image (by changing the scaling in LTImage), to track the movement of the moons of Jupiter between observations. We were, however, drawn to with the quality of this particular observation taken on the 24th January which displays the lines drawn across the surface in fantastic detail. The lines we see on the planet, are actually clouds in the atmosphere, the light coloured bands of cloud are composed of ammonia ice and are called zones. Astronomers still aren't certain about what causes the darker coloured bands, which are called belts, but the chemicals may include sulfur, phosphorus and carbon. 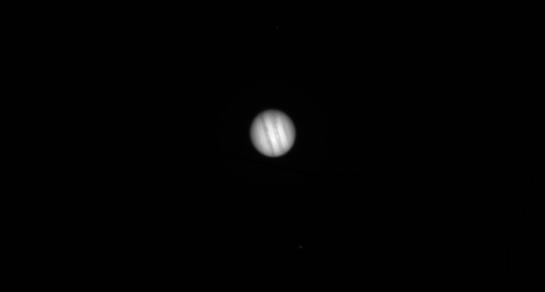