Unfortunately the image of the month for February is something much less astronomical than normal... Ice, snow and more ice! This photo shows the ice attached to the telescope enclosure - I would want to try to walk up those stairs!

The telescope has not been able to open since the 27th January due to the horrendous weather on the mountain in La Palma. It just goes to show that you can have the best robotic telescope in the world, on the second best observing site in the northern hemisphere, and at the end of the day we are still entirely controlled by nature. We are hoping that this poor spell passes soon and we can get back on sky - we'll be sure to let you know if and when we do. For more updates why not follow us on Facebook?

A big thanks to Dirk Raback, the Liverpool Telescopes island contact who has been making valiant attempts to get to the observatory and managed to take some wonderful photos in the process! 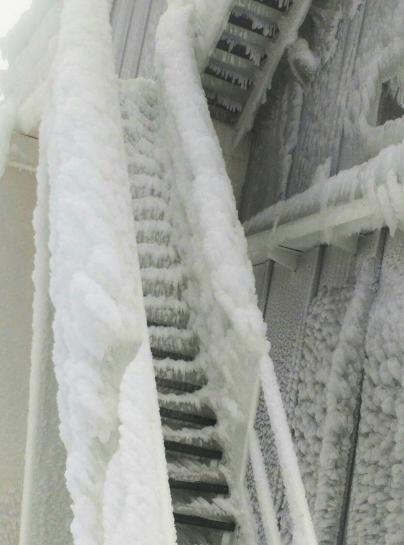 Use the NSO website and LTImage to create your own observation for our Image of the Month competition and win a 50 x 50 cm canvas of your image. You can send us your image in the following ways:

If you post on the forum include your social media tag (or your teacher/school, e.g. ours is @SchoolsObs) so we can tag you if you win.

The Only Conditions:
(1) It must be an image (or combined image) taken using the NSO ‘Go Observing’ section of our website (including the archive)
(2) Submissions for each month must be posted on any of the platforms above before 11.59 pm on the last day of that month
(3) The Canvas prize can only be posted to UK/Ireland addresses (once normal services are resumed)
(4) The NSO may use your submission on our website and/or for publicity