Our image of the month for April 2018 is a fascinating one!

Messier 87 (M87 or NGC 4486) is a supergiant elliptical galaxy situated in the Virgo constellation. Discovered by Charles Messier in 1781, M87 is home to a colossal amount of globular clusters - around 15,000, compared with the 150-200 orbiting the Milky Way.

The most interesting feature of M87, however, is the jet that can be seen to extend from the galaxy's center. This is due to the central supermassive black hole (with a mass of around 3.5 billion Suns) accreting gaseous material from the center of the galaxy and releasing a portion of it at extremely high energies. Due to the huge accretion of surrounding matter, the colossal strength of the supermassive black hole's gravitational force and the intensity of its magnetic fields, the energy released from such an encounter is enough to fire a stream of subatomic particles outwards for five thousand light-years - roughly 29,393 thousand billion miles. The jet is also referred to as a 'relativistic jet' as the particles being fired outwards are traveling at relativistic speeds - that is, close to the speed of light. 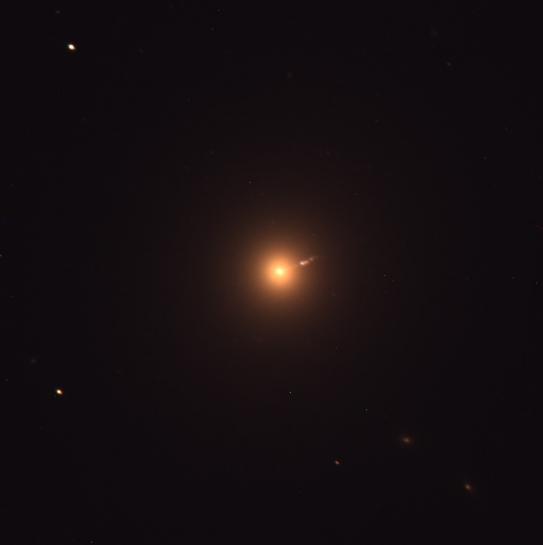