Our last image of the month for 2018 goes to a spectacular Moon shot of the Sea of Showers; observed with the Liverpool Telescope by Aisling Lucia. The 'sea' is one of the largest dark seas in the North-east region of the lunar surface (if seen from the Northern Hemisphere). In the uppermost part of the image we can see the lunar crater PLATO; a crater created by an asteroid impact likely billions of years ago, much like the large number of smaller craters we can even see in this image.

The Sea of Showers (Mare Imbrium) was likely formed by a collision in the latter stages of the formation of the Solar System, roughly 3.8 billion years ago (the start of the formation of the Solar System was approximately 4.5 billion years ago). This lunar 'sea', like the other regions that are much darker, are vast lava plains - scorched by the volcanic activity that occurred millions of years ago on the surface of the Moon.

Apollo 15 was a manned mission to the Moon that landed in the Sea of Showers in 1971, consisting of a crew size of three: Commander David Scott, Lunar Module Pilot James Irwin and Command Module Pilot Alfred Worden. It was a lunar mission that last 12 days, 7 hours and 11 minutes from take-off to landing back on Earth and was the first mission to use the Lunar Roving Vehicle; much like a car, this helped the crew traverse a greater distance than normally possible within a short space of time. 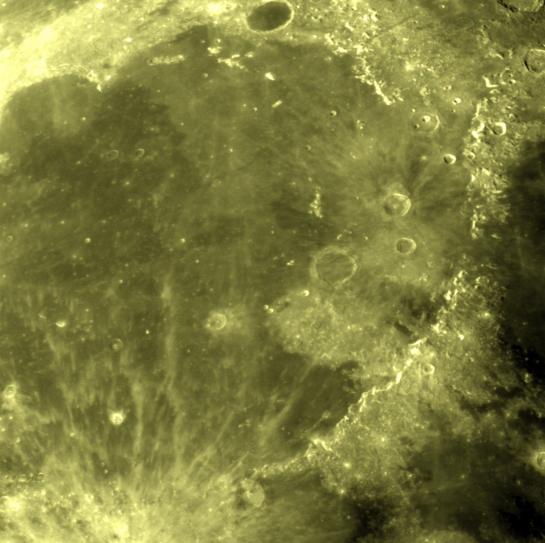