Congratulations to Bradley Young, our winner for February 2019 from Forres Academy, Scotland!

This is a single filter, H-alpha (Hydrogen-Alpha) image that has been coloured with a vibrant red/orange to bring out the detail in the filaments that make up the supernova remnant that is Messier 1: The Crab Nebula.

Without the usual Red, Green and Blue filters showing the gas that permeates this supernova remnant (the footprint of an exploded star), the filaments are much easier to see and are in fact tunnels consisting of the progenitor star's atmosphere. That is, when the star that used to be there exploded and its atmosphere was blown off in all directions for a few light-years, the physical conditions which developed afterwards constrained the old atmosphere to the structure we see in this image.

There are noticeable changes in the features of the filaments as the extremely high energy pulses created by the central neutron star causes the visible fluctuations in appearance that the remnant demonstrates every few days (rather than the astronomical timescales of many years!).

Chinese and Japanese records from July 4, year 1054 note the appearance of an extremely bright object (a "guest" star) appearing in the night sky in the constellation that we know as Taurus. The new phenomenon in the far reaches of the sky was present for two years with the naked eye. It was observed again by English astronomer John Bevis in 1731, who came across a blurred object in the lens of his telescope and, afterwards, Charles Messier independently came across the same object in 1758. For years after the Crab Nebula was observed by many different astronomers until, in 1921, Carl Otto Lampland noted (using astronomers' previous hand-drawn sketches) that the nebula seemed to be growing in size. When the more recent astronomers traced back the expansion to a time and place of origin, they found that it coincided exactly with when the mysterious bright star appeared in 1054 in Chinese and Japanese records! 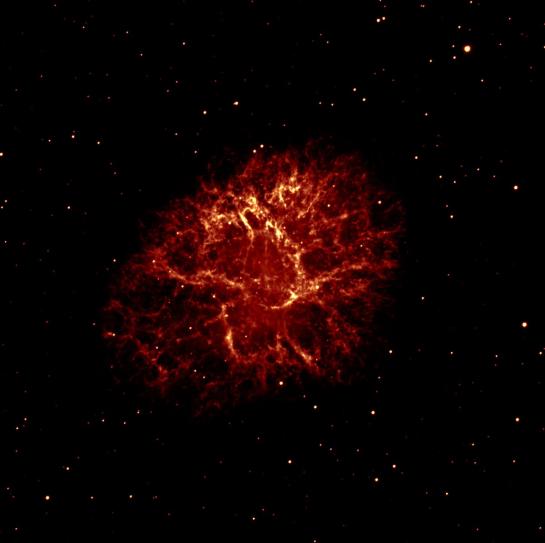 Download the files below and have a go at creating this image for yourself using LT Image:
Tags:
Black Holes
Stellar Death