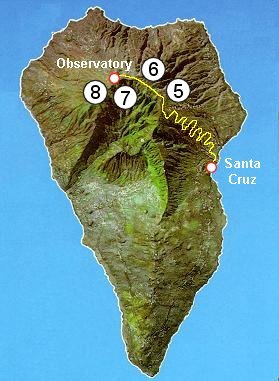 The Liverpool Telescope is part of the Observatorio del Roque de los Muchachos (ORM). This is a group of telescopes and on La Palma there are around 20. These are run by many countries from all over the world. The UK operates a handful of the telescopes on site. These stand over 2,200 metres above sea level and perch on the edge of an extinct volcano. When the volcano erupted around 2 million years ago it left a crater on the northern part of the island. This has eroded over time and formed the Caldera de Taburiente. It is the largest caldera in the world.