Brian May to be next Chancellor of LJMU

With the NSO being part of, and generously funded by, Liverpool John Moores University (LJMU), we thought we would bring you some news about the appointment of a new Chancellor of the University, Dr Brian May. In addition to being a member of the rock band Queen, Brian is also a qualified astronomer and has even co-written an astronomy book with Sir Patrick Moore. Brian is pictured here receiving an honarary fellowship from LJMU earlier this year. 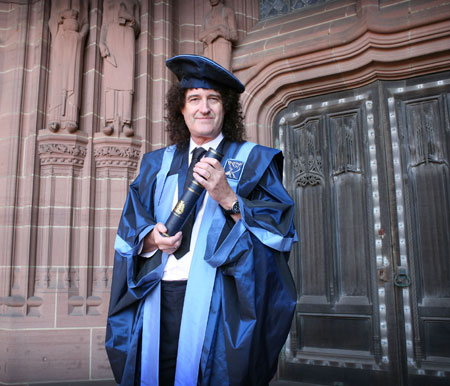 Picture of Dr Brian May, the new Chancellor of LJMU.

A University's Chancellor plays a vital role in making the institution more well known, and acts as an ambassador for the University and its staff and students. Brian will be installed as the fourth Chancellor of Liverpool John Moores University during a special ceremony early in the new year.

Brian studied Astrophysics at Imperial College, London and gained his degree around 1970. He put his academic career on hold to concentrate on his musical ambitions, but more than 30 years later, in October 2007, Brian completed a PhD (higher degree) during which he conducted several years of research looking at the movements of dust within the Solar System.