On the 10th September 2007, the Cassini spacecraft performed a close fly-by of Saturn's moon Iapetus, coming within 1,640 km (1,000 miles) of its frozen surface. During a previous, but more distant fly-by in 2004, scientists were intrigued by certain features that appeared in the image (shown below), such as a straight ridge running along the moon's equator. Another interesting discovery was that Iapetus's leading edge (the side which always faces the direction of travel during its orbit of Saturn) is as dark as coal, reflecting only 5% of the sunlight that falls upon it, whereas, as we approach the trailing edge the surface changes to bright icy terrain with reflectivity approaching 60%. 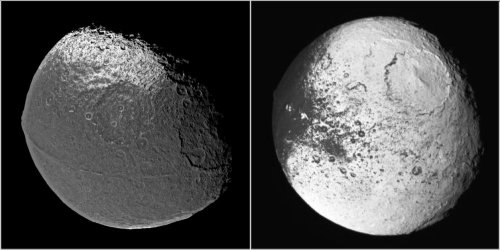 These unusual findings led scientists to plan this more recent close approach. The images that have appeared in the days following the fly-by have shown a moon of many contrasts. From left to right in the images below we can see: (1) the mountainous ridge at the equator of the moon reaching up to 10km (6 miles) above the surrounding plains, a good kilometre higher than our own Mount Everest, (2) the transition region between the dark leading and bright trailing edges of the moon that appears to show a bright landscape coated with some form of dark material, and (3) further into the transition region, the same dark material looking like ink spots splattering the walls and floors of craters within a vast frozen wasteland.

At around 1500km in diameter Iapetus is Saturn's third largest moon, orbiting every 79.3 days in what is called a synchronous orbit. In other words it always keeps the same face to the gas planet, just like our our Moon does to Earth. It was discovered way back in 1671 by Giovanni Cassini, after whom the current spacecraft is named. The moon is thought to be made mainly of ice, with a small amount (about 10%) of rocky materials thrown in.