The Phoenix spacecraft blasted off from Cape Canaveral (Florida) during the early hours of Saturday, 4th August 2007, en-route to the northern polar region of the planet Mars. The mission is due to land on the 25th May 2008, when it will begin its search for water beneath the planet's surface. Although Mars is known to be a cold, rocky planet with no liquid water on its surface, there is plenty of evidence in the form of river-like features and ancient coastlines to suggest that it was warmer and wetter in the past. 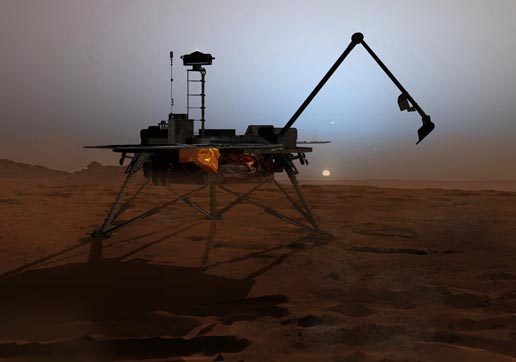 More recently in 2002, a special detector on the Mars Odyssey Orbiter indicated that there are large amounts of subsurface water ice in the northern arctic plain. The Phoenix lander will target this region, and use a robotic arm to dig through the top soil layer to the water ice below in order to bring soil and water ice samples back to the lander platform for more detailed investigation. 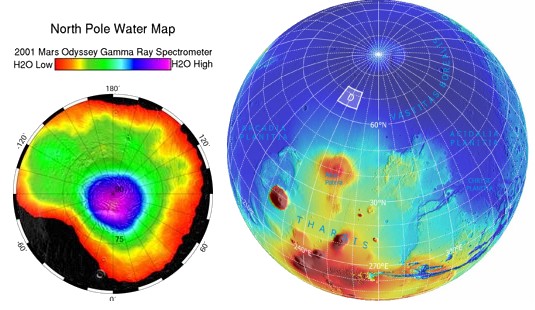 The water map (above left) shows the regions that were found to have higher levels of water ice below the surface, and the globe (above right) marks the intended landing site (area D) for the Phoenix lander when it arrives next summer. The red regions of the globe show mountainous regions on Mars, whilst the blue regions are flatter plains.