Astronomers have recently announced the discovery of a 60th moon orbiting around the planet Saturn. The tiny moon is just 2 km (1.2 miles) wide and thought to be made of ice and rock. Although its official title is S/2007 S4, the team that found it have nicknamed it 'Frank' whilst a more suitable name is decided upon. 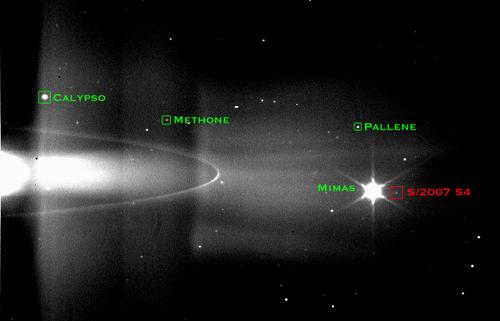 Image showing many of Saturn's moons, taken by the Cassini spacecraft © NASA

The new object was first seen as a faint dot in a series of images taken by the Cassini spacecraft on the 30th May 2007. Astronomers then looked through older images from Cassini and were able to confirm that it was indeed a previously undiscovered moon. S/2007 S4 is located between the orbits of the moons Methone and Pallene, putting it about 200,000 km from Saturn. This is roughly half the distance that our own Moon is away from Earth.