Today marks the 50th anniversary of the launch of Sputnik 1, the first artificial satellite ever to depart from planet Earth. Sputnik 1 was launched by the Soviet Union (USSR) on 4th October 1957, and led to a period in history known as the Space Race, during which the USA and USSR competed to achieve further milestones in space exploration, such as the first man in Space (USSR 1961) and on the Moon (USA 1969). 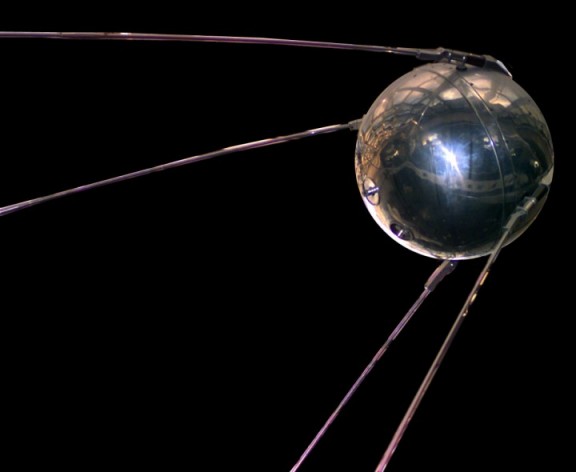 Replica of Sputnik 1, the first artificial satellite launched from Earth

Sputnik 1 was a silver sphere (pictured) around the size of a baseball and weighed in at 83kg (or 13 stone). Attached to it were four whip antennas connected to battery powered transmitters that emitted a continous 'beeping' signal during its 98 minute orbit. The signal continued for 23 days and announced to the world that the Space Age had truly begun. Less than a month later, on November 3, the Soviet Union followed this success by launching a dog called Laika into orbit aboard Sputnik 2. Sputnik is the russian word for 'travelling companion'.