Recent radar images of Saturn's moon Titan, taken by Nasa's Cassini spacecraft, appears to show a huge stretch of water close to the moon's north pole. Smooth liquid surfaces appear dark on radar images, allowing scientists to identify coastlines and even islands on the pictures (see below left) coming from Titan. The newly discovered sea is shown alongside Lake Superior in the USA (below right) - the world's largest freshwater lake. 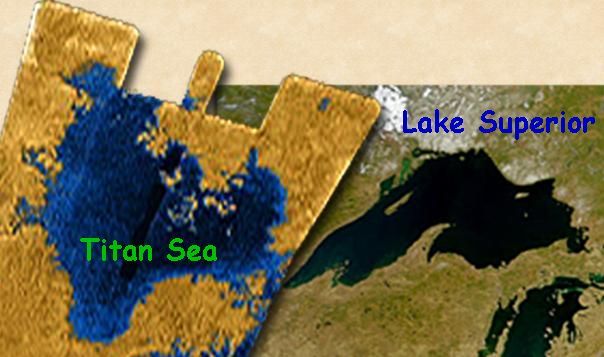 Radar image (left) of Titan's surface, showing what appears to be a sea the size of Lake Superior in America (right). © NASA

Because temperatures are so cold on Titan (around -180&degC), water would be frozen solid. This makes it more likely that the seas we see are made of liquid methane or ethane, both of which behave like gases in Earth's warmer atmosphere. The radar images were taken when Cassini flew past Titan on the 22nd February 2007.

Radar detectors work by bouncing radio waves off the surface of moons and planets, and use the time difference between the radio wave leaving and returning to the detector to make an image of the planet's surface. Because the spacecraft is above the surface, radio waves which arrive back quickly must have bounced off high objects and those which take longer bounce off lower objects. In other words we can generate a picture of mountains and valleys, or in this case .... very flat regions like seas.

If you want to learn more about the Cassini mission, then please follow this link.