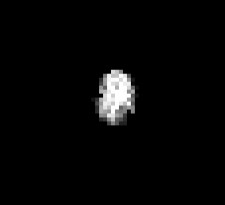 An asteroid known as 2007 TU24 passed close (in astronomy terms) to Earth yesterday morning (29th January 2008) but is now heading safely away. At its closest point, the asteroid was 554,209 kilometres (344,370 miles) from Earth, or roughly 1.4 times the distance between the Moon and Earth.

At between 150 and 600 metres in diameter, this passing Near-Earth Object (NEO) had the capability of inflicting significant regional damage on the Earth, had it made a direct strike.

Given the estimated number of NEOs of this size (thought to be around 7,000), similar objects would be expected to pass this close to Earth, on average, about once every 5 years or so. The average gap between actual Earth impacts for an object of this size would be about 37,000 years.

Thankfully, 2007 TU24 will be the closest currently known approach by a potentially hazardous asteroid of this size or larger until 2027.

For more information about the search for Near-Earth objects, click here.