During the early hours of the 7th October, the asteroid known as 2008 TC3 entered Earth's atmosphere and created a spectacular fireball in the sky above Sudan. Although 2008 TC3 was only a few metres in diameter, this was the first time that a meteoroid had been spotted before it entered the atmosphere, and has provided the first test of the systems in place to identify potentially dangerous Near Earth Objects (NEOs).

The NEO was first spotted at 06:39 GMT on the morning of the 6th October by astronomers using the Mt. Lemmon 1.5 metre telescope near Tucson, Arizona. When the discovery observations were reported to the Minor Planet Centre (MPC), early calculations showed that the object was headed for an Earth impact within 21 hours. The MPC quickly requested and received follow-up observations from 26 international observatories. Within an hour of receiving the initial data set, astronomers had predicted that the object would enter the Earth's atmosphere above northern Sudan around 02:46 GMT on October 7. As the day progressed and more and more data arrived, the tradjectory was further improved and the impact location narrowed down. This allowed warnings to be made to the Sudanese authorities and aircraft in the area. 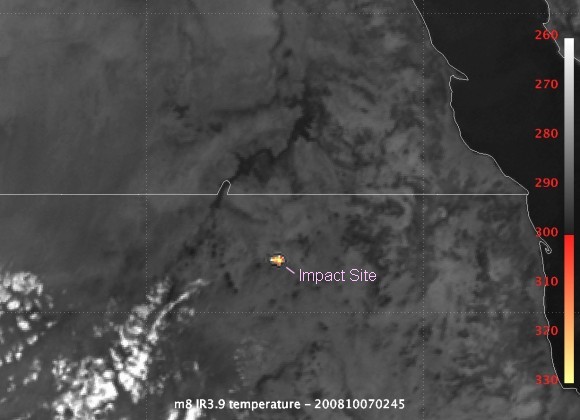 Images from a weather satellite, showing the moment of impact over Sudan.
Credit: EUMETSAT

In the end, just 20.5 hours after first being seen, 2008 TC3 entered the atmosphere at a near-grazing angle (about 20° from the horizontal) and a relative velocity of 12.4 km/s. From the brightness of the object in space, astronomers estimated that the rock was 2-5 metres in diameter and would have created an explosion in the upper atmosphere equivalent to about 1 kilotonne of TNT. Whilst most of the meteor would have burned up on entering the atmosphere, there would still have been a shower of smaller meteorite particles landing on the Sudanese countryside.

This first prediction of an actual impact has highlighted the successful evolution of the Near-Earth Object (NEO) Program's discovery and orbit prediction process. The discovery was made, observations were provided by 26 international observatories, the orbit and impact computations were determined, verified and announced well before the impact, which took place only 20.5 hours after the discovery itself. Perhaps we can rest safer in our beds knowing that many dedicated people around the world are watching for the next dangerous NEO, which given enough warning, we may be able to do something to protect ourselves from.