We are pleased to announce that the NSO has been nominated for a Sir Arthur Clarke Award (2008) in the Outreach Award for the Public Promotion of Space category. This is all the more pleasing because nominations are suggested by members of the public before being vetted by a distinguised panel of judges representing the UK space community. Past winners have included Sir Patrick Moore, Professor Colin Pillinger (of Beagle 2 fame) and Michael Foale (astronaut). 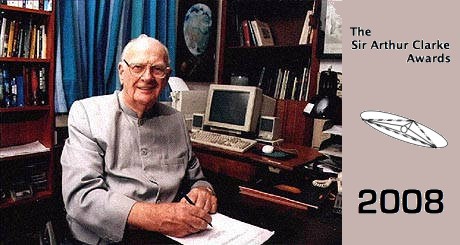 The winners will be announced at the UK Space Conference in Surrey, which is taking between the 27-29th March. Other nominees at the ceremony will include the likes of Stephen Hawking and Sir Richard Branson, who have been nominated in other categories. The UK Space Conference involves 300 participants from around the world who have come to discuss the past, present and future of the UK's involvement in space research and exploration.

Sir Arthur Charles Clarke, CBE (1917-2008) is a British born science fiction author, inventor, and futurist. He is most famous for his work on the film and novel 2001: A Space Odyssey. Earlier in his career, and 15 years before the launch of the first satellite (Sputnik 1), he worked on plans for a network of communication satellites around the world, and calculated that satellites orbting the Earth at 35,786 km (22,240 miles) above the equator would take 24 hours to go around - exactly the same as the Earth's rotation. As such, these satellites would stay in the same position above the surface in an orbit known as a geostationary or Clarke orbit.