Astronomers have recently discovered the first pulsar in the Universe that emits a directed beam made up entirely of gamma-rays. A pulsar is a rapidly spinning neutron star, the crushed core left behind when a massive star explodes, which projects a sweeping beam of energy out into space, in a similar way to the beam of light coming from a lighthouse. Anyone in the line of sight of that beam will observe a star blinking from once every few seconds, right down to several hundred times a second - essentially the speed at which the neutron star rotates. 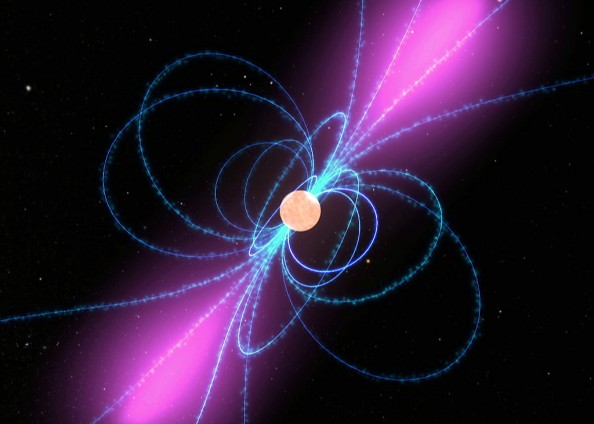 Diagram of the magnetic lines and high-energy beam (purple) eminating from a pulsar.
Credit: NASA

Most of the time this beam of energy takes the form of radio waves that we can easily detect. Occasionally, however, they blink in visible light or even x-rays. This is the first time they have been spotted only in the far more energetic gamma-rays.

The gamma-ray-only pulsar lies within a supernova remnant known as CTA 1, which is located around 4,600 light-years away, and its beam sweeps Earth's way every 316.86 milliseconds (i.e. about 3 times a second). The pulsar itself was created following a supernovae explosion around 10,000 years ago, but still emits over 1,000 times the energy of our Sun.

Pulsar beams are quite complex physical phenomena but essentially occur because neutron stars have very strong magnetic fields and rotate rapidly. Charged particles spinning around the magnetic lines (see image above) are able to escape from the star's magnetic poles and stream out in a beam of gamma-rays travelling at nearly the speed of light.