Cassini flies through water-plumes on Enceladus

On the 12th March 2008, NASA's Cassini spacecraft made a daring flyby of Saturn's moon Enceladus, passing at 15 kilometres per second (32,000 mph) through icy water jets that are blasted up by geysers on the moon's frozen surface. During the flyby, the spacecraft collected samples that may hopefully yield evidence of a liquid-water ocean trapped beneath the icy crust of Enceladus.

The above image (taken in late 2005) shows Saturn's moon Enceladus backlit by the sun, show the fountain-like sources of the fine spray of material that towers over the south polar region. The geysers originate from fractures running along the moon's south pole, and appear to be spurting out water vapour at approximately 400 metres per second (800 mph). The flyby was planned so that Cassini's particle analyzers could pass directly through plumes discovered back in 2005, in order to collect information on the density, size, composition and speed of the particles. This data will most likely take several weeks, if not months, to properly analyse. In the meantime, NASA have released some detailed images of the moon's surface, such as the one below of the north polar region of Enceladus taken during the flyby. 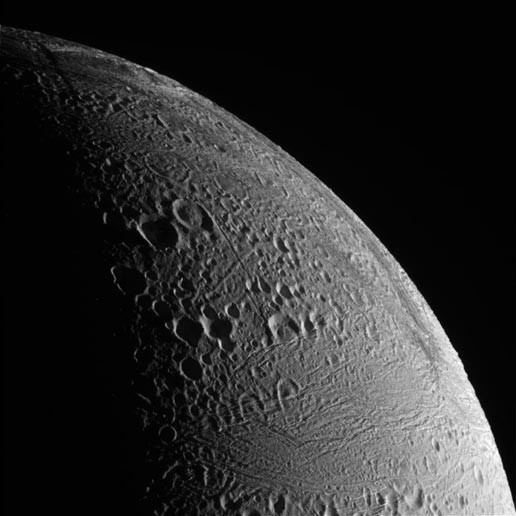 Close-up of the north-pole region of Enceladus, taken during the flyby.
Credit: NASA

This was the first of four Cassini flybys of Enceladus planned for this year, and saw the spacecraft come within 50 kilometres (30 miles) of the moon's surface at closest approach. Future trips may bring Cassini even closer to the surface, in an attempt to image some of the actual geyser locations.

For more information about the Cassini-Huygens mission to Saturn, click here.