Astronomers have managed to capture direct images of an extra-solar planetary system for the first time. The discovery was made by the Keck and Gemini-North telescopes when they used a new and rather complex observing technique to cancel out the light from the host star, HR8799, so that the light from the planets would remain. The observations were conducted in infrared light, and allowed the astronomers to clearly identify two planets (b and c) that have previously been detected by indirect methods, and also locate a new, unknown planet (d) on the processed images.

The following image shows an image of the HR 8799 system taken by the 10-metre Keck telescope. The speckled region in the middle is where the technique has removed the light from the central host (parent) star, whilst managing to keep the light from objects orbiting around it. This is important because the parent star is several hundred times brighter than the planets and would obscure them without the technique being used. 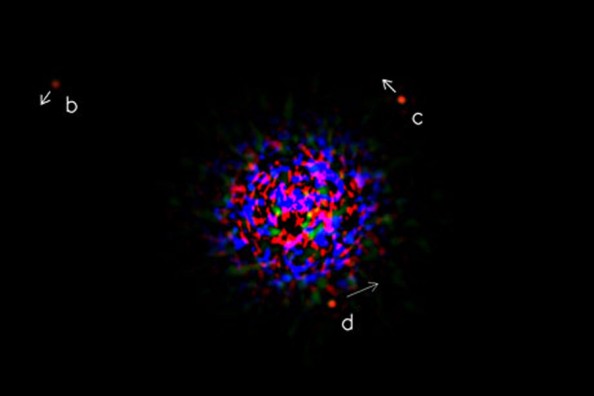 The next image shows the resulting image from infrared observations conducted on the 8-metre Gemini-North telescope. 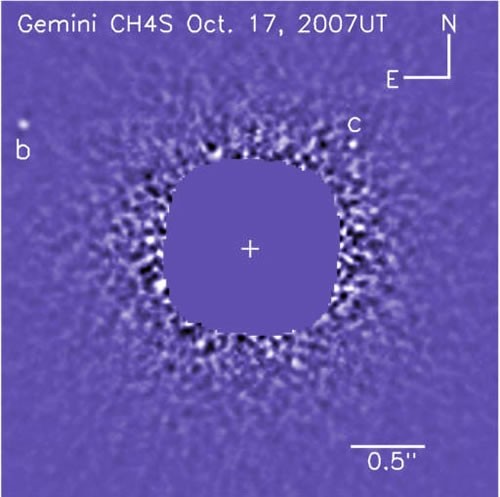 The parent star (HR 8799) is about 130 light years away from Earth and around 1.5 times the mass of our own Sun. Although much younger than the Sun, it is a little under 5 times the brightness.

The planets, which formed about sixty million years ago, are young enough that they are still glowing from heat released as they shrank. Analysis of the brightness and colours of the objects shows that object A is around 10 times the mass of Jupiter and orbits every 100 years or so at a distance of around 24 AU. This is not that far removed from the orbit of the planet Neptune. Object C is also around 10 Jupiter masses and orbits at 40 AU, whilst object B orbits at around 70 AU and has a slightly lower mass, at around 7 Jupiter masses.

This is a very important discovery for the field of Astronomy, because a planetary system of this type has never been directly seen in this way. Before this, we could only infer the presence of such a system by the unusual way in which the host star wobbled. As technology improves we will find many more systems such as HR8799, and with time, will be able to look for Earth-like stars orbiting closer in, where warmer temperatures would allow the existence of water on the surface and might provide the right conditions for life to exist.