The International Astronomical Union (IAU) has chosen the name Makemake (pronounced Mah-keh Mah-keh) for the newest member of the dwarf planet family. The object, previously known as 2005 FY9, was originally discovered in 2005 and subsequent observations have shown that it meets all the criteria to be classified as the fourth dwarf planet, and also the third Plutoid. The word Makemake is Polynesian in origin and is the name of the creator of humanity and the god of fertility in the mythology of Easter Island in the South Pacific. 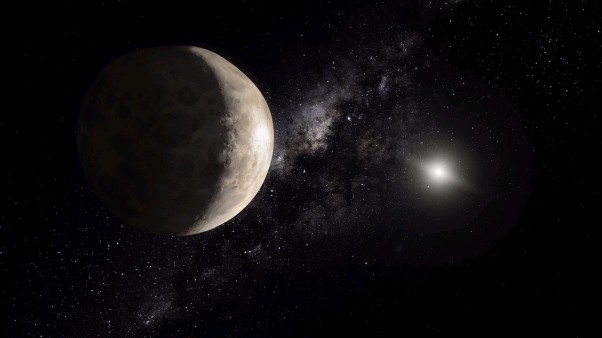 Makemake orbits at a distance of between 38 and 53 AU from the Sun, and follows a highly inclined (29°) path compared to the main planets in our solar system. As a result, its orbital period is nearly 310 years, which is more than Pluto's 248 years. Its diameter is roughly three-quarters that of Pluto. Makemake has no known satellites and observations suggest an extremely low average temperature of around -243°C (or 30K).

The solar system is currently known to contain three other dwarf planets, Ceres, Pluto and Eris, however, it is expected that many more will be discovered as technology improves. Ceres is the only one of these that is not also a plutoid, because it is located in the asteroid belt between Mars and Jupiter - well inside the orbit of Neptune, which is considered to be the inner boundary of plutoids.

The IAU is an official organization, made up of astronomers from around the world, which decides on all things astronomical, such as the names of stars and of newly discovered objects. This is one of the many tasks it has been performing since the early 1900's.