Avalanche seen on the planet Mars

A NASA spacecraft in orbit around the planet Mars has recently captured the first image of an avalanche on the planet's surface. The picture (shown below) was taken on the 19th February by a high-resolution camera on board the Mars Reconnaissance Orbiter. On the right of the picture we can see clouds of dust resulting from an avalanche of rocky material on the steep cliffs that slope down from left to right in the middle of the image. 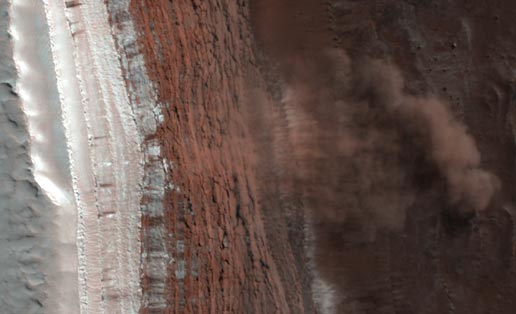 The cliffs are located close to the north pole region of Mars, and are around 700 metres (2300 feet) tall. They slope down at an angle of over 60 degrees, which is far too steep to be able to scramble up. The top plateau seen on the left of the image is covered with bright (white) carbon dioxide frost, which is slowly disappearing from the polar regions as Spring arrives.

This photograph is one of 2400 images of the surface of Mars that have been released by NASA at the beginning of March 2008. The spacecraft is actually looking at carefully selected areas of Mars to see how things change from season to season, and at how the frost cover moves back and forward within the Martian polar regions.

For more information about the Mars Reconnaissance Orbiter, click here.