In the early hours of this morning (26th May 2008), NASA's Phoenix spacecraft landed safely in the northern polar region of Mars, to begin three months of studying a site chosen for its likelihood of having frozen water trapped just below the planet's surface. An eager world received a radio signal at 01:54 AM (UK) to confirm that the craft had survived its difficult landing just 15 minutes earlier - a final approach that involved a parachute descent followed by a rocket assisted touchdown. The 15 minute delay was the time it took the radio signal to reach Earth, travelling at the speed of light. 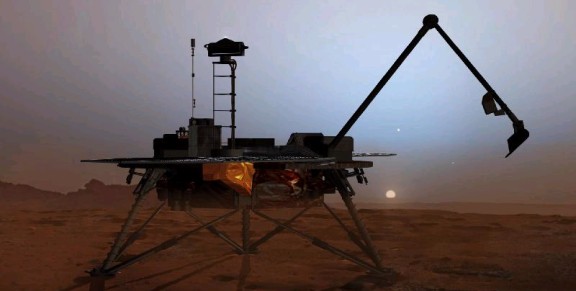 Artist's impression of the NASA's Phoenix working on the surface of Mars.
Credit: NASA/JPL

The newly arrived Phoenix will continue to check its various cameras and instruments over the next few days, including its 2.35 metre (7.7 foot) robotic arm, to make sure that all systems are ready to begin its numerous experiments. One of the first detectors to be checked was the Surface Stereo Imager, which sent back the first images of Mars - see below. The image on the left shows one of the footpads of the spacecraft, whilst the right-hand image shows the bleakness of the frozen Martian plain where it landed.

Two of the first images taken by the Phoenix Spacecraft, moments after arriving on Mars.
Credit: NASA/JPL

The Phoenix spacecraft started its journey on the 4th August 2007, taking nearly 10 months to complete its 679 million kilometre (422 million mile) journey through space. It will now begin its quest to investigate the history of water on Mars, and the potential of being able to use that water during future manned missions. Although Mars is known to be a cold, rocky planet with no liquid water on its surface, there is plenty of evidence in the form of river-like features and ancient coastlines to suggest that it was warmer and wetter in the past.

For more information about the NASA Phoenix mission, click here.