Almost two years after the International Astronomical Union (IAU) introduced the category of dwarf planets, they have chosen the term "Plutoid" as a name for transneptunian dwarf planets similar to Pluto. The solar system is currently known to contain just two plutoids, Pluto and Eris (shown below), however, it is expected that many more will be discovered as technology improves. 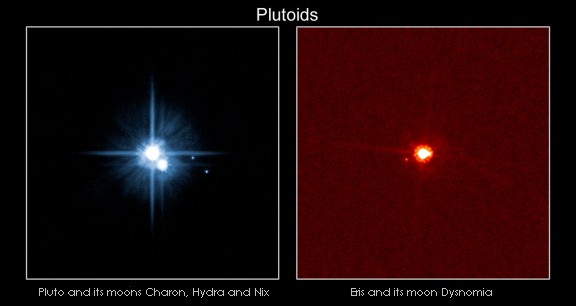 Images of the two known Plutoids in the Solar System.
Credit: NASA/HST

The IAU is an official organization, made up of astronomers from around the world, which decides on all things astronomical, such as the names of stars and of newly discovered objects. This is one of the many tasks it has been performing since the early 1900's. The official line they came up with at a recent meeting in Oslo (Norway) is as follows:

Plutoids are celestial bodies in orbit around the Sun at a distance greater than that of Neptune that have sufficient mass for their self-gravity to overcome rigid body forces so that they assume a hydrostatic equilibrium (near-spherical) shape, and that have not cleared the neighbourhood around their orbit.

Note that the moons of plutoids are not themselves plutoids, even though the may be massive enough to pull themselves into an almost spherical shape. In addition, the dwarf planet Ceres is not a plutoid as it is located in the asteroid belt between Mars and Jupiter - well inside the orbit of Neptune.