The Gigagalaxy Zoom Project has just released one of the most detailed images of the full night sky as seen from Earth. As part of the International Year of Astronomy 2009 (IYA2009), Gigagalaxy has managed to capture three ultra-high-resolution images of the night sky that online stargazers can zoom in on and explore at an incredible level of detail.

The first of these Gigagalaxy images (shown below) provides a 4000 x 2000 pixel edge-on view of our own Milky Way galaxy, along with numerous star clusters, constellations, dust clouds, nebula and several nearby galaxies. 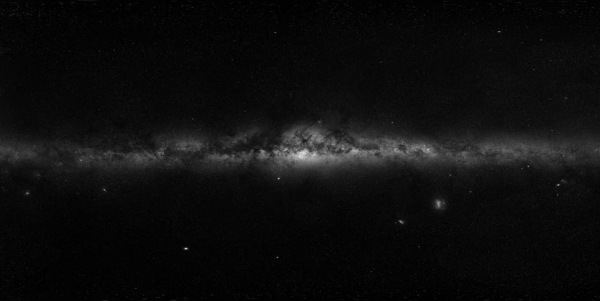 Image of the full sky as captured by the Gigagalaxy Zoom Project
Credit: ESO/Brunier/Gisard

The above image is a minature version of the actual Gigagalaxy Zoom image, which comes in at an incredible 800 million pixels. What you see is a 360° panoramic image that covers the entire southern and northern celestial sphere and reveals the entire cosmic landscape that surrounds our tiny blue planet.

The image is composed of almost 300 fields, each one captured four times by astrophotographer Serge Brunier, adding up to nearly 1200 photographs that encompass the entire night sky. Each photo required a six-minute exposure, resulting in a total exposure time of more than 120 hours.

If you would like to find out more about these stunning images, then please visit the Gigagalaxy Zoom website.