After four minor impacts over the past 52 years of space exploration, February 10th saw the first direct and catastrophic impact of two major satellites in low-earth orbit. The two communication satellites, both weighing in at well over 455 kgs, collided on Tuesday at nearly 800 km (500 miles) over the Siberian tundra.

The collision involved an Iridium commercial satellite (IR33), which was launched in 1997, and a non-functioning Russian satellite (Kosmos-2251) launched in 1993. The closing speed, thought to be several hundred miles per hour, has created a detectable debris field of around 300 pieces of space junk, although the total number of smaller pieces is thought to be in the many thousands.

This will add to the approximately 17,000 items (greater than 10cm) of space debris that are currently being tracked in Earth's orbit - see below. Around 5% of that total are fully functioning satellites, with the remainder being man-made objects, such as the discarded upper-stages of spacecraft launches, solid rocket motor effluents and now impact debris. The estimated population of particles between 1 and 10 cm in diameter is greater than 200,000, and the number of particles smaller than 1 cm probably exceeds tens of millions. 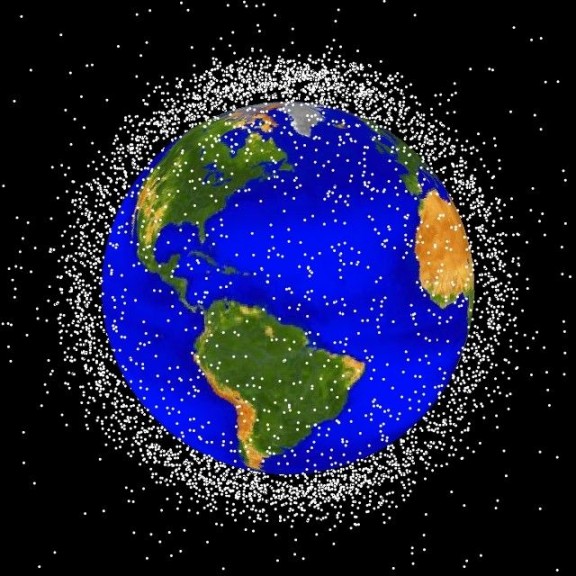 CGI of the space debris in low-earth orbit currently being tracked - Credit: JSC/NASA

As the debris field spreads out there is concern that pieces from the February 10th event may impact with other Iridium satellites, which are all in near-polar orbits. In the worst case scenario, further impacts could set off a chain reaction, with the rate of collisions increasing exponentially until all 66 active Iridium nodes and spares are rendered space debris, in addition to other satellites in low-earth orbits. If this were to happen, there could be no direct-to-home satellite television, no more weather pictures from space, no more GPS navigation and extremely risky access to space.