If the weather is kind to us over the next few days, UK observers will have a rare chance to see a passing comet with the naked eye. Comet Lulin (or C/2007 N3) was discovered in July 2007 and found to orbit in an opposite way to all the planets.

You can think of comets as great dirty snowballs that hurtle around the solar system in elongated oval orbits around the Sun. Those that get too close find material on their surface being evaporated (turned into gas) by the immense heat of the Sun. The water vapour and dust released is usually blown away by Sun's rays to form enormous tails that stretch out behind the comet. It is estimated that Comet Lulin is losing enough water every 15 minutes to fill an Olympic-size swimming pool. 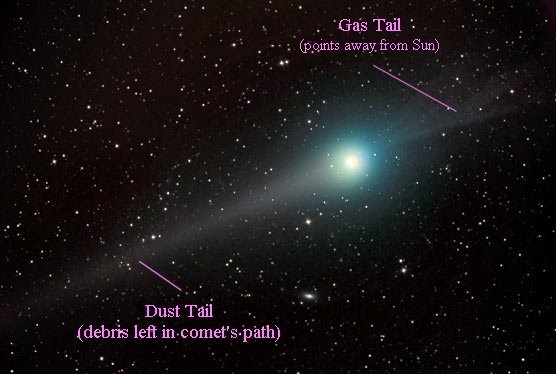 In recent images of Comet Lulin (see above), it appears that there are 2 tails: a dust tail of heavier debris that is left along the path of the comet, and a gas tail of lighter charged particles that are blown away by the solar wind and appear to trail off in the opposite direction of the Sun.

Over the past few weeks observers have been watching Lulin coming closer to Earth, and predict that at its closest approach, on the 24th February, the comet will pass within 61 million kms (38 million miles) - that's about 160 times farther than the Moon. This should mean that the comet will be at its brightest between the 23rd and 25th of February, although anyone with binoculars or a telescope should be able to spot Lulin for a couple of weeks either side of the 24th.

If you fancy having a look at Comet Lulin, then you can use the above map. The best way of tracking it down will be to look for the planet Saturn shortly after it rises above the eastern horizon, say at around 9:00 pm. Saturn will be brightest object in the area, and from there you can look for the comet. To the naked eye in a dark sky, Lulin will look like a dim, fuzzy 'star', but through binoculars will appear like a fuzzy ball that is somewhat brighter and more concentrated near the centre and more diffuse around the edges.