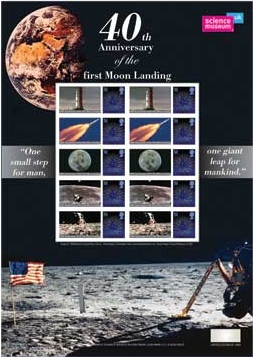 With just a week to go before the 40th Anniversary of the first Moon landing, we have decided to run an exciting summer competition to celebrate one of mankind's greatest achievements. We are asking school pupils around the UK and Ireland to submit their own piece of artwork or poetry relating to the lunar landing on the 20th July 1969, and thanks to the generosity of Buckingham Covers, we are able to offer a rather special prize.

The best poem or artwork will receive a limited-edition commemorative stamp sheet signed by the astronaut Edgar Mitchell, who is one of only 12 people to have walked on the surface of the Moon. Dr Mitchell was a member of the Apollo 14 crew that landed in the lunar module on 5th February 1971, and in total he spent over 9 hours walking on the surface. During the mission they collected around 50kg of lunar rock and conducted various surface experiments.

If you would like to find out more about the competition prize (shown right), then please click on the following link:

The deadline for entries is the 4th September 2009, and can be made either electronically, by emailing (Title - Summer Competition Entry) your work as an attachement to:

or by the usual postal route, by sending your entry in an envelope marked 'Summer Competition' to the usual address.

The winner will be chosen by the 12th September 2009. Only one entry per person, and please tell us your name, age, the school you attend and the name of your form teacher. Best of luck!