We are Astronomers domeshow is launched 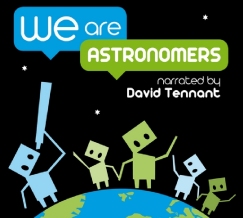 It's rare that we recommend a commercial venture on the NSO website, but the new We are Astronomers 360° fulldome digital planetarium show, which was launched on the 23rd May, ticks so many educational boxes that we simply had to tell you about it.

The show uses the full power of modern digital planetaria to look at a brief history of astronomy, before concentrating on the work of astronomers in the digital age. In short, 'We Are Astronomers' reveals the global collaboration, technology and dedication required to answer the unresolved questions of the Universe.

The show has been created by NSC Creative with input from UK astronomers, and has been produced in collaboration with science centres up and down the UK. Having been funded by the Science and Technologies Facilities Council (STFC), you can rest assured that the show is an accurate reflection of the way real science is being conducted today, and modern technology is used to convey this in an exciting and understandable way to the audience.

If you would like to find out more about the 'We are Astronomers' domeshow, and where in the UK you can see it, then click on the following link: