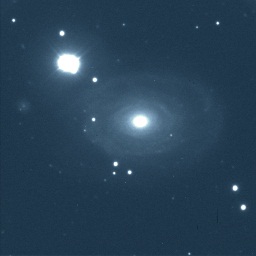 The NSO reached another major milestone on the 14th October 2010, when we received our 20,000th observing request from Saints Peter and Paul Catholic College in Widnes, who were looking to secure an image of the spiral galaxy NGC 691. Thankfully, good weather and dark skies (i.e. no Moon about) meant that the target was observed within 24 hours. The resulting image is shown to the right.

NGC 691 appears to be a classic spiral galaxy that is slightly inclined to our line of sight - hence it appears a bit squashed. We have used false colours to try and highlight structure in the spiral arms, as they appear somewhat faded due to two bright stars in the image. The bright stars are fairly close to us, at just a few 10's of light-years, whereas estimates put the distance of the galaxy at around 122 million light-years - a long way behind all the individual stars you can see in the image.

It has been just over two years since we received the 10,000th request, which means that the NSO is averaging around 5,000 requests each year. Of course we couldn't have reached this milestone without the preceeding 19,999 requests, so we would like to thank all of you for taking part in the NSO project over the past six years.