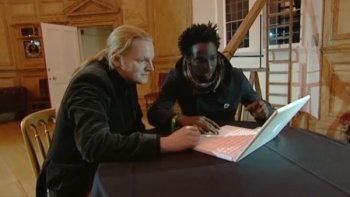 Andy Newsam (left) and Andy Akinwolere (right) get observations from the Liverpool Telescope in La Palma from the Royal Observatory in Greenwich.
Credit: CBBC

National Schools' Observatory astronomer Andy Newsam has guided Blue Peter presenter Andy Akinwolere to success in his hunt to see some planets. After being thwarted by the weather trying to observe using telescopes in Norfolk and Greenwich, the Liverpool Telescope came to the rescue by getting observations of Jupiter, Mars, Uranus and Neptune.

Filmed as part of the International Year of Astronomy, the Blue Peter planet hunt was broadcast this week and highlighted the power of robotic telescopes in bringing the wonders of the night sky to anyone.

As world leaders in using this new technology to enhance education, the NSO was the obvious place to turn to when the BBC were looking for expert help and Andy Newsam was happy to step in: "Being on Blue Peter is a lifelong ambition of mine, and to combine that with a chance to show children how the science we are doing here can be part of their lives was an amazing experience".