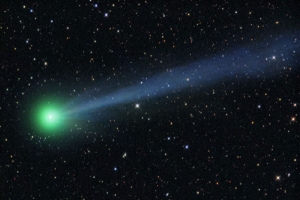 A recently discovered comet has brightened so much in the past month, that it's now visible to the naked eye. Comet McNaught, officially catalogued as C/2009 R1, was discovered by astronomer Robert McNaught last September using the using a 0.5-metre telescope in Australia, and will pass within 60 million km (37 million miles) of the Sun on the 2nd July, before disappearing out of the Solar System forever.

Because of dark skies associated with the new Moon this weekend (12th/13th June), being up and about between 2am and 3am this Saturday or Sunday morning will be the best time to observe the comet. For those planning to brave the unsociable hour, you will need to look low above the north-east horizon shortly before sunrise. Try to find a viewing location away from streetlights, and with no buildings, trees or hills in the north to east sector - oh, and take a warm coat, hat and binoculars if you have them. The following skymap will show you where to look: 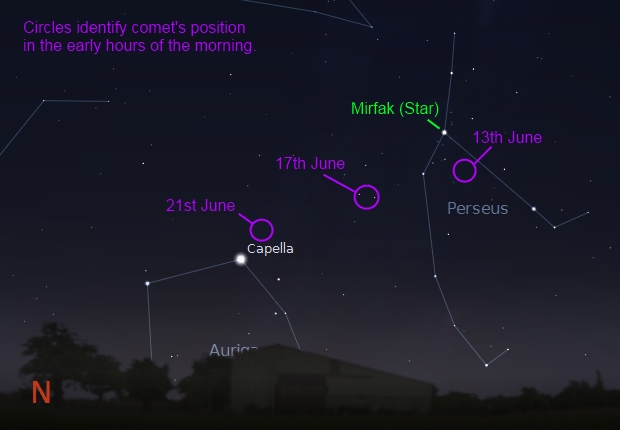 Stellarium map showing where you can look for Comet C/2009 R1 Mcnaught.

To the naked eye in a dark sky, C/2009 R1 will look like a dim, fuzzy 'star', but through binoculars will appear like a fuzzy ball that is somewhat brighter and more concentrated near the centre and more diffuse around the edges. You should also be able to pick out a cometary tail, which stretches out behind the central nucleus.

You can think of comets as great dirty snowballs that hurtle around the solar system in elongated oval paths around the Sun. Those that get too close find material on their surface being evaporated (turned into gas) by the immense heat of the Sun. The water vapour and dust released is usually blown away by Sun's rays to form enormous tails that stretch out behind the comet. It is sunlight reflecting off these boiled-off particles that causes the comet to increase in brightness as it nears the Sun.