Newly discovered exoplanet may be habitable

Astronomers in the USA have recently discovered a small rocky planet orbiting a nearby star at a distance that puts it right in the middle of the star's habitable zone; raising the possibility that life could exist outside our own world. The habitable zone is a term used to describe the region around a star where an orbiting planet could possess water in liquid form, although the term 'Goldilocks Zone' is perhaps better in describing a region that is neither too hot, nor too cold. 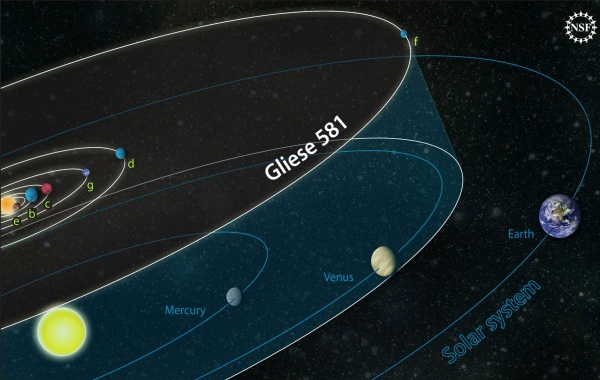 Planetary orbit of Gliese581g in comparison to our Solar System - © NSF

Known as Gliese 581g, the new exoplanet is around 3 times the mass of Earth and takes just 37 days to complete one full orbit of its parent star. That puts it well inside the orbit of the solar system's closest planet, Mercury, as can be seen from the image above. Note that Gliese 581g is located between planet 'c' and 'd', with the naming system relating to when they were discovered, rather than how far away they are from the middle. At just 20 light-years from Earth, Gliese 581 is considered to be a very local star. However, it is much cooler and redder than the Sun, which means that the habitable zone is much closer in when compared to the Solar System.

Observations have now revealed a total of six exoplanets around Gliese 581, with at least two being potential candidates for supporting life. That said, it would also appear that the new planet is tidally locked with its parent star, meaning that one side will always be in daylight, whilst the other will remain in perpetual darkness. Combined with the very short year, this could make things very interesting for any farming community on Gliese 581g.