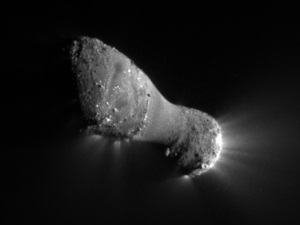 On the 4th November 2010, NASA’s Epoxi spacecraft passed within 700 kilometers (435 miles) of Comet Hartley 2 and sent back several detailed images, revealing that at the heart of the comet lies a peanut-shaped object made of rock, dust and ice. We can also see how the energy of the Sun is vapourising frozen carbon dioxide on the surface, which then releases dust, along with vapour, by way of visible jets.

You can think of comets as great dirty snowballs that hurtle around the solar system in elongated oval paths around the Sun. Those that get too close find material on their surface being evaporated (turned into gas) by the immense heat of the Sun. The water vapour and dust released is usually blown away by Sun's rays to form enormous tails that stretch out behind the comet. It is sunlight reflecting off these boiled-off particles that causes the comet to increase in brightness as it nears the Sun.

Comet Hartley 2, officially designated 103P/Hartley, is a small periodic comet that orbits the sun every 6.46 years. It was discovered in 1986 and observations suggest the object is around 1.4 kilometres (0.87 miles) long, reflects very little sunlight and rotates once every 18 hours. The mass of the comet is estimated at around 300 million tonnes, but barring a catastrophic breakup, it is thought the comet should survive another 700 years at its current rate of mass loss.

The comet passed perihelion (closest point to the Sun during its orbit) in late October, so is now heading away from the Sun. As it never gets closer than 1.05 au, it should not be a threat to Earth. However, ejected material could cause meteor showers in the future.

You can find out more about Epoxi's close approach to Comet Hartley 2 by clicking HERE.