LCROSS spacecraft set to crash on the Moon 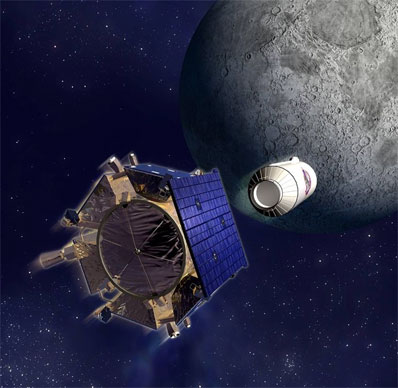 The LCROSS impactor was launched alongside the Lunar Reconnaissance Orbiter (LRO) back in June 2009, and is designed to unearth evidence of sub-surface water in a dark crater on the lunar surface. By choosing a crater that is in permanent shadow, scientists hope that any water that may have found its way there will not have been evaporated by heat from the Sun. LCROSS is made up of two components, the Atlas V’s Centaur upper stage rocket (i.e. part of the launch vehicle), which remains attached to the LCROSS shepherding spacecraft and all its sensors.

On final approach, the shepherding spacecraft and Centaur will separate. The Centaur will then act as a heavy impactor to create a debris plume that will rise above the lunar surface. The impact at the lunar South Pole is predicted to take place on 9th October, 2009 at 12:31 p.m. GMT (1:31 p.m. UK time). Following four minutes behind, the shepherding spacecraft will fly through the debris plume, collecting and relaying data back to Earth before impacting the lunar surface and creating a second debris plume.

The debris plumes are expected to be visible from Earth using 10-12 inch diameter (and larger) telescopes. Sadly, the impact will take place during the daytime for those of us here in the UK, and also for the Liverpool Telescope.

However, if you would like to know more about the LCROSS mission, or even watch the impact live on NASA TV, then click on the main LCROSS website.