NSO's own Moonsaic 5 project is underway 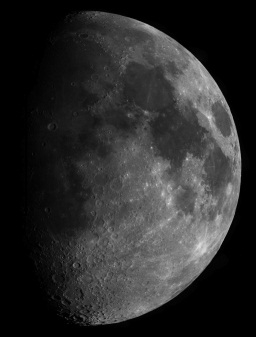 It's been a while since the last one, but following the success of previous Moonsaics, we will be running a fifth event in the final weeks before Christmas. This time around, we will be using observations of a first-quarter phase Moon. This means that around half of the visible Moon appears illuminated, such that shadows cast near the terminator (the line between darkness and light) reveal fascinating structure on the lunar surface.

For those who haven't done one before, a Moonsaic is a Keystage 2/3 project (Ages 7-14) to assemble a large poster of the Moon using a mosaic of observations taken by the Liverpool Telescope. We will release three JPEG images on each weekday from Monday 6th December through to Friday 17th December (30 images in total), with each image being a random part of the final picture.

The JPEG images can then be printed out and, because they all overlap, can easily be stuck together to create a large version of the original image - i.e. a Moon mosaic. When completed, the moonsaic can be pinned to a classroom noticeboard as part of an end of term project. We want the moonsaic to be a bit of fun, but we also hope it encourages students to discover a little bit more about the Moon and its changing phases.

You can find out more about the Moonsaics by clicking HERE.