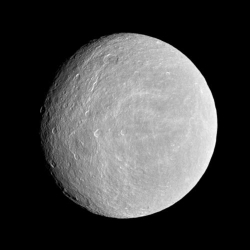 Scientists have just announced that a recent (March 2010) flyby of Saturn's moon, Rhea, by the Cassini spacecraft has resulted in the discovery of a very thin atmosphere made up of oxygen and carbon dioxide. With Rhea thought to be three-quarters ice and one-quarter rock, the presence of oxygen is thought to be the result of interactions between ice water on the moon's surface and Saturn's magnetic field.

In essence, Cassini saw flows of oxygen after the moon's surface was bombarded (or irradiated) by energetic particles trapped in Saturn's magnetic field. It is believed that the collisions result in chemical reactions that can decompose the surface ice and release oxygen. The instruments on Cassini indicated a peak oxygen density of around 50 billion molecules per cubic metre, which is about 5,000,000,000,000 times less dense than that found in Earth's atmosphere - that's what we call a thin atmosphere.

Oxygen has already been found in the atmosphere of two of Jupiter's moons, Europa and Ganymede, but this more recent find suggests that oxygen may be more common in the solar system than was first thought. Some astronomers have even suggested that this form of oxygen generation could create suitable conditions for the existence of life, especially if the moon in question has a sub-surface water ocean and atmospheric oxygen can find its way below the surface.

You can find out more about Nasa's Cassini mission by clicking HERE.