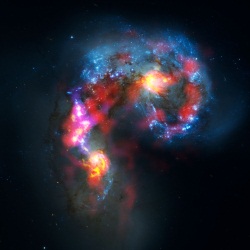 One of the most ambitious and complex ground-based astronomical observatories has just opened it's eyes for the first time. The Atacama Large Millimeter/submillimeter Array, or ALMA for short, is a joint venture between many countries (the UK included) that will allow astronomers to study the Universe in the millimetre and sub-millimetre part of the electromagnetic spectrum - that's the part between infrared and radio wavelengths, more commonly known as the microwave region. At these wavelengths, scientists can investigate objects and structure that are too cold to be seen in infrared and optical light, such as clouds of dense cold gas from which new stars form.

Although ALMA is still under construction, it was felt that there were enough radio antennas (20 have been installed so far) to begin science observations. When fully complete, ALMA will be able to combine the signals from an array of 66 radio antennas to create some of the most detailed images of their kind. In order to reduce atmospheric interference, the ALMA array has been sited on the Chajnantor plateau in northern Chile, at a height of around 5,000 metres (16,400 ft)- that's nearly four times the height of Ben Nevis! At those heights, there is a dangerous lack of oxygen in the air, making it very difficult for people to breathe; as a result, the radio antennas have to be built lower down the mountain and transported to the plateau on massive, purpose-built lorries.

The first image from ALMA was taken using just 12 radio dishes, and shows the Antennae Galaxies. Because millimetre images are harder to visualise than normal images, the first ALMA observation has been combined (see right) with the optical counterpart of the same region taken using the Hubble Space Telescope (HST). The Antennae Galaxies are a pair of colliding galaxies with dramatically distorted shapes, and whilst visible light will show us the stars in the galaxies, ALMA’s view reveals the clouds of dense cold gas, which can be seen as red and orange blobs on the picture. The image also reveals that massive amounts of gas are not only found in the cores of the two galaxies, but also in the region where they are colliding. Here, the total amount of gas is billions of times the mass of our Sun, suggesting that there is a rich reservoir of material for future generations of stars. 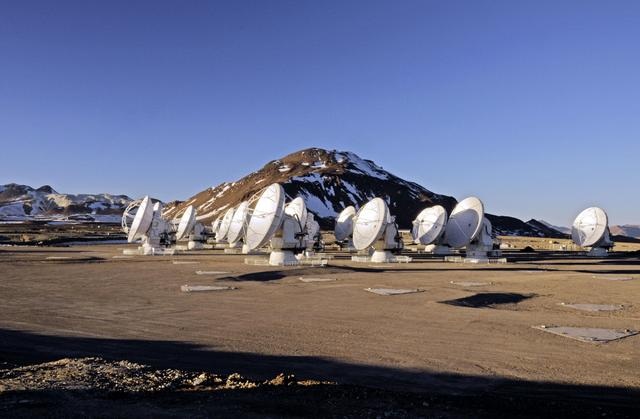 Recent image of the 20 dishes (will eventually be 66) that make up the ALMA telescope Credit: ESO/ALMA