Two dying stars to be reborn as one 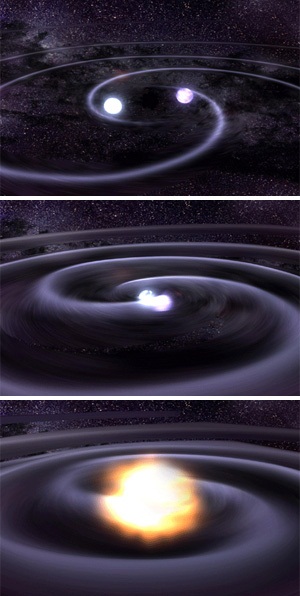 Astronomers have recently discovered a binary pair of white dwarf stars that are fast approaching the point where they will merge to form one new star. White dwarfs are the remnant cores of Sun-like stars that are slowly cooling down in the vastness of space. They are about the size of Earth, having ejected the vast majority of their outer atmospheres, and glow white hot with the incredible heat built up through billions of years of nuclear reactions. The cooling process takes many millions of years, so the stars will be emitting energy well into the future.

The newly discovered binary system in question, affectionately known as SDSS J010657.39-100003.3, is located 7,800 light-years away in the constellation of Cetus. It consists of two white dwarfs - one visible star, and one unseen companion whose existence can be determined from the motion of the visible star. The visible star is 17% of the mass of the Sun, whilst the second white dwarf weighs around 43% as much. Astronomers believe that both are made of near-pure helium.

Observations have shown that the stars orbit each other every 39 minutes at a distance of just 225,000 km (140,000 miles) - that's just over half the distance from the Earth to the Moon - and are travelling at an incredible 1 million miles per hour. It is predicted that the two stars will continue to pull towards each other, and will collide and merge in around 37 million years. When some white dwarfs collide, they explode as a supernova; however, they both have to weigh more then the Sun for this to occur. As the two components in this system are too light for a supernova to occur, the merger will create the conditions for new helium fusion to occur, thereby giving the merged star a new lease of life.