Crab Nebula seen to erupt in a super-flare

The Crab Nebula, also known as M1, recently saw an eruption (or flare) that was five times more powerful than has been previously recorded. The outburst was noticed by NASA’s Fermi Gamma-ray Space Telescope on the 12th April and seen to continue for six days. Nasa's Chandra X-ray satellite also observed the flare and witnessed unexpected changes in x-ray emission from the Crab, an object that was once thought to be one of the steadiest high-energy sources in the sky. The following images show what M1 looks like to an x-ray telescope in comparison to what the Liverpool Telescope sees. The images are to scale. 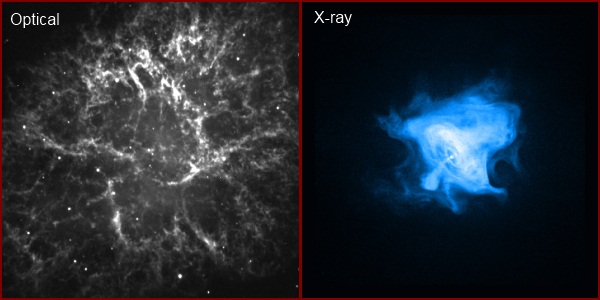 During the Fermi telescope's monitoring of the outburst, the flare became 30 times more energetic than the nebula’s normal gamma-ray output and about five times more powerful than previous outbursts. Astronomers think that these flares are caused by sudden rearrangements of the magnetic field not far from the neutron star, but exactly where that’s happening still remains a mystery.

The crab nebula is the scattered remains of a massive supernova that was recorded back in 1054 AD. Over the past 1,000 years (almost) it has continued to expand into the amazing object that we see today. It is located 6,500 light-years away in the constellation of Taurus. At the centre of the expanding gas cloud is the remnant core of the original star, a super-compressed neutron star that is around 30km in size and spins at an incredible 30 revolutions per second. As it rotates, the star swings an intense beam of radiation towards the Earth, creating a pulsed emission that is detectable in the radio spectrum, and is typical of spinning neutron stars.