New galaxy is the furthest visible object in the Universe

NASA's Hubble Space Telescope (HST) has recently discovered a new galaxy that is believed to be the most distant object we can see in the entire Universe. By studying the infra-red spectrum of the galaxy, scientists have calculated its distance to be around 13.2 billion light-years, i.e. the light from it has taken 13.2 billion years to reach us. Given that the age of the Universe is estimated to be 13.7 billion years, this galaxy is thought to have formed just 500 million years after the Big Bang. Astronomers hope that such galaxies will tell us more about the early Universe and about how stars and galaxies first formed. 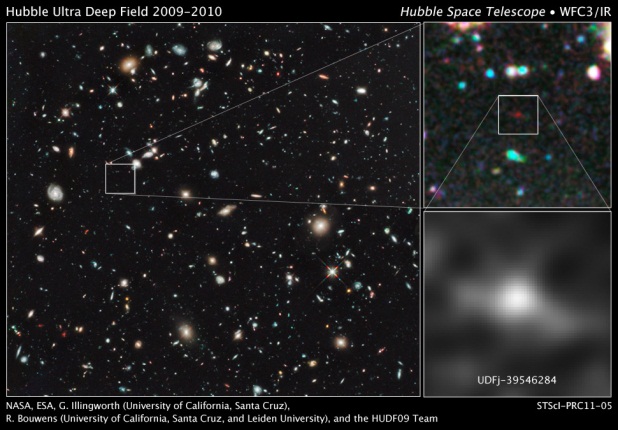 The dim object, called UDFj-39546284, is a compact galaxy of blue stars (that now look red due to the redshift effect), which is about one hundred times smaller than our own galaxy, the Milky Way. Astronomers are still not exactly sure when the first stars were formed, however, evidence such as this suggests that there must have been a very rapid burst of star formation during a 200 million year period just after the big bang, when the Universe was still fairly hot. In the future, we hope to discover many similar objects, and new technology, such as the James Webb Space Telescope (due for launch within the next five years) should allow us to see more distant objects - and the further back we go, the more we can add pieces to the puzzle.