NASA's GRAIL mission blasts off to study the Moon's interior 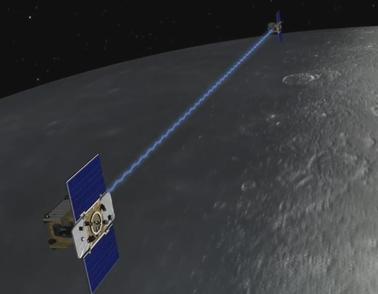 Yesterday (10/09/11) saw the successful launch of NASA's latest lunar mission, aboard a Delta II rocket. The twin GRAIL spacecraft are designed to work in tandem to measure the gravitational field of the Moon to a very high precision. Astrogeologists will then be able to use those results to explore features on and below the lunar surface, and will hope to get a better understanding of how the Moon formed and evolved.

The spacecraft, which are both the size of washing machines, are using low-energy tradjectories to travel to the Moon, and are not expected to get there until New Year's eve at the earliest. They will then spend the next two months refining their orbits. Once in position, they will occupy the same orbit (albeit slightly seperated) and spend the next 82 days taking measurements.

The spacecraft work by using instruments that can accurately measure any changes in the relative movement between them. This means that any massive objects, such as mountains and sub-surface masses, that cause the twin craft to move slightly apart or together can be detected and mapped. Even movements down to a few microns (the width of a red blood cell) will be measured, meaning that relatively small variations in the lunar structure will be detectable.

The other exciting aspect of the mission, as far as schools are concerned, is that GRAIL will also be carrying a set of cameras for the MoonKAM schools project, which will allow secondary students to request detailed images of the lunar surface. If you would like to know more about, and perhaps get involved in, the GRAIL MoonKAM project, then please click here.

For more information about the GRAIL mission in general, click here.