Astronomers using the NASA Kepler Space Telescope have discovered an Earth-like planet orbiting a star similar to our own Sun. This is an exciting breakthrough that takes us another step forward in our ongoing search for planets capable of harbouring life. The planet, called Kepler-22b, is located within what astronomers call the habitable zone - a region around a distant star where the energy from it is at the right level to keep water in its liquid form. Liquid water, energy and organic molecules, such as carbon, are thought to be the three most important ingredients on which life depends.

Kepler-22b has a radius around two and a half times that of Earth, and yet is the smallest extra-solar planet ever found in the habitable zone of a distant star. It also has a similar orbital period - 290 days, as compared to Earth's 365 days. In addition, the parent star it orbits is also very similar to the Sun - it too has a spectral class of G. 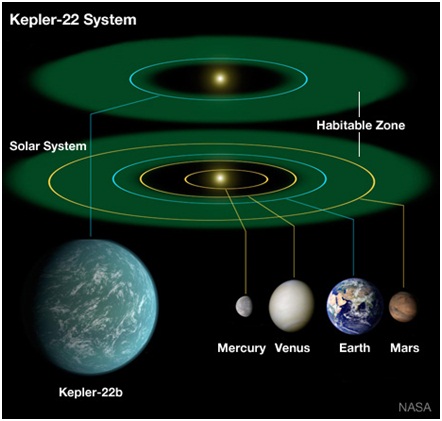 Comparison of the Kepler-22 system with the Solar System Credit: KST/NASA

The Kepler Space Telescope was launched in March 2009, and is currently observing over 150,000 stars across the night sky. It works by looking for tiny drops in the light coming from a star, as an orbiting planet passes in front of it. This is known as the Transit Method of detection. If the light dips recur on a regular basis, then there's a good chance of a planet orbiting around the host star. In the two years of operation, NASA has indicated that the Kepler telescope has found a total of 2,326 possible planets, of which 207 could be Earth-sized, and more importantly, 10 of which are thought to live in the habitable zone.

The recent discoveries have renewed hope that one day we might find life elsewhere in the Universe.