Launch of the last ever Space Shuttle mission 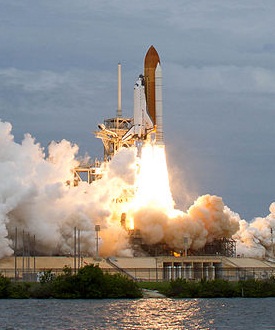 The world witnessed the final launch of the NASA Space Shuttle programme earlier today (11:29AM Florida, USA time), when the STS-135 mission blasted off from the Kennedy Space Centre. With its crew of four astronauts, the space shuttle Atlantis embarked upon a 12 day mission to supply food, water, fuel, equipment and experiments to the International Space Station (ISS). It will also be carrying out tests to see if robots can be used to safely refuel satellites in orbit.

Today's launch marks the 166th manned space flight undertaken by NASA, and the 33rd flight of Atlantis over the course of its distinguished 30 year career. Only four astronauts were sent on this mission, compared to the normal six or seven, because there are no more space shuttles on standby to undertake a rescue mission. If the shuttle is seriously damaged in orbit, the four crew will move into the ISS and return, one at a time over the course of a year, in Russian Soyuz capsules.

STS-135 is scheduled to dock with the ISS on the 10th July, the 37th time a space shuttle has done so, and will return to Earth on the 20th July, after which, the international community will have to rely on Russian spacecraft to resupply the ISS. The first shuttle launch took place back in 1982 and involved the Columbia craft. Over the past 30 years a total of 135 flights have taken place, with hundreds of astronauts from many nations being sent into space.

If you would like to learn more about the current mission, select the following link: STS-135 Mission Page