The project team on NASA's Messenger mission to the planet Mercury has started to release hundreds of high-quality images of the rocky planet's cratered surface. The spacecraft's detectors have been mapping surface features during the course of over a hundred orbits carried out in the past 3 months; ever since the probe first entered orbit on the 17th March 2011. The following picture is a nice example of one of those images, and shows a 100km wide crater called Atget. 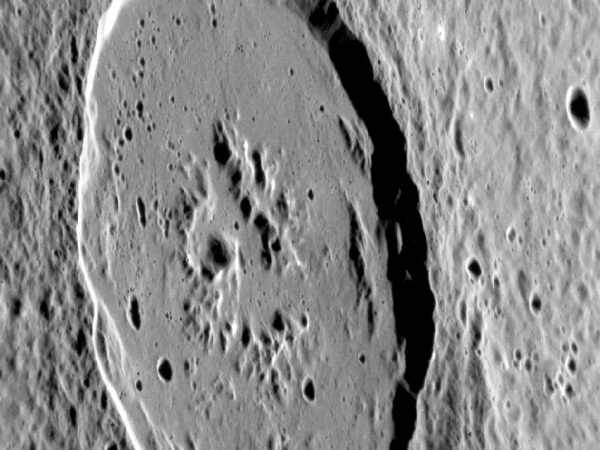 The new images represent a vast improvement on the only previous images sent back from the Mariner 10 spacecraft in 1973, which were taken at a much higher altitude and with less advanced camera technology.

Mercury may appear to be just another rocky, cratered object like the Moon, but it holds a number of mysteries for scientists, which these Messenger images could help to explain. For example, what is the cause of Mercury’s strange timekeeping, which results in the innermost planet having a year-length of 88 Earth-days but a day-length of 176 Earth-days. Also, how is the planet's surface affected by daytime temperatures of up to 400°C, followed by nighttime temperatures down to -200°C. Questions also arise from the fact that Mercury’s iron core is disproportionately large; accounting for as much a 65% of the planet's mass. Finally, why is Mercury the only other rocky planet in the solar system to have a global magnetic field. This would be an obvious feature if Mercury had liquid magma flowing around its core, but scientists believe that the core of such a small planet should have cooled by now and the magma solidified.

The new high-quality images of Mercury’s surface will hopefully give scientists the data they need to begin unlocking the planet’s mysteries, and perhaps even tell us more about the workings of our own planet.

For more information about the Messenger mission, please click here.