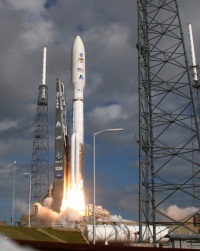 NASA's Mars Science Laboratory mission (MSL) safely blasted off from Cape Canaveral on the 26th November 2011 and is now safely on the way to Mars. The spacecraft will arrive in August 2012, with the primary goal of landing the Mars Curiosity Rover on the martian surface in one piece; not an easy task given that the rover weighs around 900 kg. The delivery will, touch wood, be achieved via a three stage descent. Initially, a large parachute will slow the lander following atmospheric entry, following which four rockets will fire to further control its descent and orientation. The final stage involves a sky crane lowering the rover to a soft landing on the red martian soil.

Once on the surface, the rover (shown below) will use a suite of high-tech cameras and detectors to search above and below the surface for signs of microbial life, such as bacteria. In other words, Curiosity is designed to determine whether Mars was able to support life in the past, or may even do so now.

In order to get around, the rover has six independent wheels that are powered by a radio-isotope system that can generate electricity from the heat of plutonium's radioactive decay. This nuclear power source will allow the mission to operate on Mars' surface for at least a full Martian year (687 Earth days), and will provide greater mobility and operational flexibility, enhanced science payload capability, and exploration of a much larger range of latitudes and altitudes than was possible on previous missions to Mars. In fact, Curiosity is five times as large, and carries more than ten times the mass of scientific instruments than were on the Mars Exploration Rovers (Spirit and Opportunity). 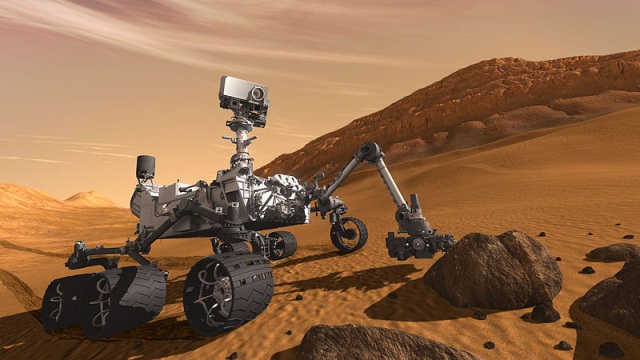 If you would to know more about the Mars Science Laboratory, please visit the main mission page.