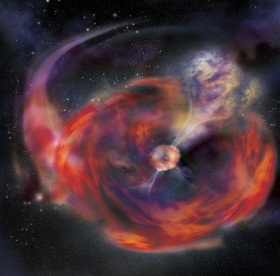 Observations taken recently by the Liverpool Telescope have helped with the discovery of a new kind of gamma-ray burst (GRB). GRBs are narrow beams of extremely intense radiation that are emitted along the rotation axis of a supernova. These bursts of gamma-rays can last anywhere between 10 milliseconds and 30 minutes, after which astronomers can continue to observe longer lasting emissions in other parts of the electromagnetic spectrum, such as the optical or infrared. GRBs are immensely energetic and will produce more energy in a few seconds than the Sun will produce in 10 billion years.

GRBs are created during a supernova, when a star can no longer support nuclear fusion and collapses in on itself under the force of gravity. Most GRB sources are billions of light years from our Solar System and thankfully, there has never been a recorded burst in the Milky Way.

There are currently two different types of GRBs:

However on Christmas day 2010, a new type of GRB was observed (called GRB101225A) that lasted more than half an hour (much longer than most GRBs detected so far), and where its low‑energy emission (i.e. all radiation measured below the gamma-ray regime) differed in nature from that of the usual GRB. Astronomers believe that this GRB was the result of a spiral merger between a neutron star and a red giant star, during which a thick envelope of hydrogen gas was created. The low-level energy from the subsequent GRB was absorbed by this envelope (the gamma rays escaped) to create a vast glowing shell. It was another 10 days before the shell became spread out enough for optical telescopes to see the supernova contained within. The optical light from the explosion reached its peak 40 days after Christmas, before slowly decaying thereafter. It was the LT that detected the appearance of the supernova after 10 days, and led to further investigation by astronomers.