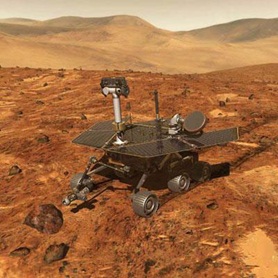 NASA’s Mars Exploration Rover Opportunity passed the 20 miles mark after a 124 metre drive on 17th July 2011. The rover, which was only designed to drive 0.4 miles during a three month mission, completed the feat on its 2,658th day in operation on the surface of Mars.

The latest manoeuvre has taken the rover to within a mile away of the Endeavour crater, which has been a long-term goal since August 2008. At around 22km (13.7 miles) in diameter, exploring Endeavour will become Opportunity’s greatest task so far, as it is much larger than all the other craters that have been explored by the rover so far, namely Victoria (0.47miles), Endurance (0.08 miles) and Eagle (0.01 miles).

The rover is currently travelling backwards in order to preserve the life of the motor on the front-right wheel, which has given concern to the project team in recent months. The 17th July drive also featured an autonomous hazard detection portion, during which it paused to check for, and deviate around, obstacles before proceeding.

Opportunity landed on Mars three weeks after its twin rover, Spirit, on 24th January 2004. After its initial 90 sols mission was completed successfully, the rover remained in operation and continues to carry out extensive geological analysis of Martian rocks. Whilst Spirit ceased communication in 2010, Opportunity is still fully functional – despite narrow escapes from becoming stuck in sand late-2004 to 2005 and sand-storms in 2007.

If you would like to discover more about Opportunity, go to the NASA Mars Rover Mission website.