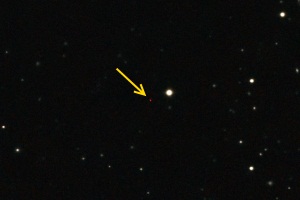 A team of astronomers, including many from the UK, have discovered the most distant quasar ever seen. In fact ULAS J1120+0641, as it is affectionately known, is so far away that the light has taken 12.9 billion years to reach us. This means that it must have formed less than 770 million years after the big bang. Although the quasar is by far the brightest object in the known universe, it only appears as a tiny red dot on the composite infrared image shown to the right. It's so red in colour because the light from it has been shifted towards that part of the electromagnetic spectrum by a process known as redshift.

Quasars are known to be powered by super-massive black holes at their centres, and observations by a number of telescopes, including the Liverpool Telescope, show that the mass of this quasar's black hole is around 2 billion (that's 2,000,000,000) times that of the Sun. Such an enormous mass is very difficult to explain, given that astronomers generally think that super-massive black holes are created over a long period of time, and grow by slowly accumulating (sucking) material from their surroundings. Indeed, this quasar appears to have existed at a time when astronomers had thought that the first stars and galaxies were starting to appear.

Astronomers think that the vast power being generated by quasars comes from high-energy collisions within the accretion disks swirling around the black hole, as seen in the image above. In other words, the black hole is so big that it's ripping apart and consuming nearby stars, which results in a continuous string of massive explosions that can be seen across the universe.

The discovery of ULAS J1120+0641 was made using data from an ongoing infrared sky survey being conducted at the United Kingdom Infrared Telescope in Hawaii, and was confirmed by observations made with the Liverpool Telescope, the William Herschel telescope, the Gemini North telescope (also in Hawaii) and the Very Large Telescope in Chile.