Nasa's Kepler telescope has now found over a thousand Exoplanets

NASA's Kepler Space Telescope has just announced the discovery of hundreds of new Extra-solar Planets (or Exoplanets), taking the number of planet candidates it has discovered to a staggering 1,235. Of these, 68 are roughly Earth-size, 288 are 2-3 times the size of Earth, 662 are Neptune-size, 165 are the size of Jupiter and 19 are much larger than Jupiter. In addition, 54 of the planet candidates just announced have been found to orbit within the habitable zone of their parent star, opening up the possibility of liquid water existing on the planet's surface and perhaps, life. The new discoveries are based on observations conducted between the 12th May and 17th September, 2009, of more than 156,000 stars in Kepler's field of view, which covers approximately 1/400 of the sky. The enormous amounts of data being produced by Kepler means that it has taken astronomers until now to determine what exactly the telescope had seen.

Because Kepler uses the transit method to detect exoplanets, only planetary systems that are aligned with our line-of-sight will be visible - it's a bit like only being able to find frisbees that are edge-on. Given that only around 10% of systems are inclined in this way, we can assume that exoplanets are common-place throughout our galaxy. 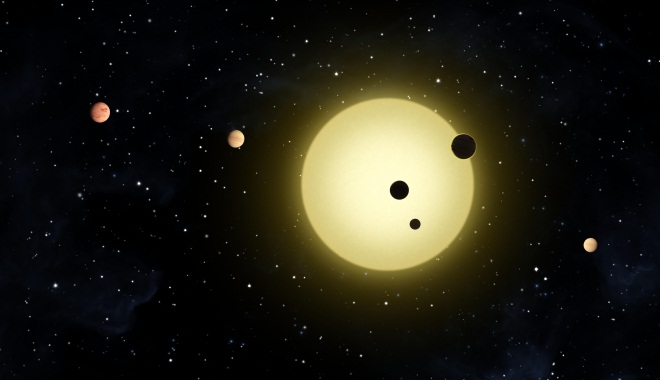 Of the stars with planetary candidates, 170 show evidence of having more than one planet. The most exciting of these is Kepler-11, located approximately 2,000 light-years from Earth, which has six confirmed planets, all orbiting closer to their parent star than Venus does to the Sun. All of Kepler-11's planets are larger than Earth, with three appearing to be Neptune-sized gas giants. Finding six planets using the transit method tells us that the system is very flat, in fact, much flatter than our own solar system.

These discoveries, although hugely exciting, are only the start of Kepler's search for distant worlds. It has surveyed just 0.25% of the sky so far, and only for long enough to find the really close-in planets. As transits of planets within the habitable zone of sun-like stars occur about once a year and require three transits for verification, it is expected to take three years to locate and verify Earth-size planets orbiting sun-like stars. As the discoveries continue in the coming years, astronomers will start to turn their attention to which of the many thousands of planets we should investigate for water, or even life, and when propulsion (engine) technology improves, which we should send missions to. We live in exciting times!

If you want to know more about the Kepler mission, please click HERE