An enormous solar flare that was spotted in February 2011, the largest for nearly five years, appears to have been caused by interactions between five rotating sunspots. Sunspots are dark features on the Sun's surface, where magnetic fields generated in the Sun's interior push up through the surface and into its atmosphere. Ionised particles or plasma (hot gas) gets trapped by and travels along these magnetic fields, and this allows us to see the magnetic field lines as they loop high above the surface. The following image of the Sun's Corona (hot outer atmosphere) shows many of these magnetic loops protruding from the surface. 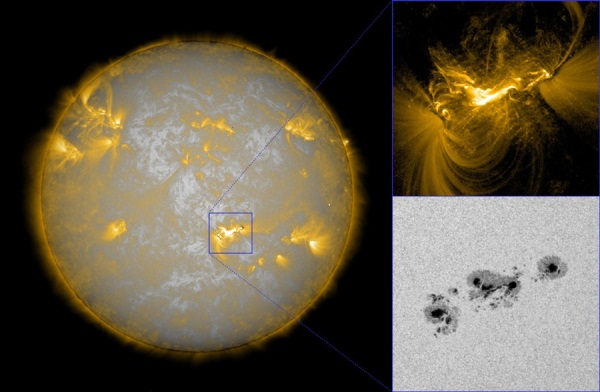 A close-up of the region where the flare originated shows the five sunspots on the surface (bottom right) and the twisted magnetic field lines (top right). Whereas sunspots indicate the exit and entry points of magnetic filed lines, solar flares are the result of a sudden release of energy stored within highly twisted magnetic line features. It's a bit like twisting an elastic band. If you twist it too much, the band can snap and release all the energy stored within it - generally by inflicting pain on the person doing the twisting. In the Sun's case, the snapping results in a sudden burst of energy (a flare) that fires off into space. When one of these flares is directed towards the Earth, it can result in spectacular aurorae (lights above the North and South Pole) and even damage to orbiting spacecraft or electical power networks on the surface.