Astronomers have recently discovered an extremely close binary pair of super-massive black holes using one of the 10-metre wide Keck telescopes at the Mauna Kea observatory in Hawaii. Due to their close proximity, scientists believe that the massive objects are in the early stages of a merging event that will result, albeit in millions of years, in one of the most energetic events in the Universe. There is evidence to show that nebulae (clouds of gas) and galaxies go through merger events, but despite the seemingly violent nature of the phenomena, the stars are so far apart that not much happens. However, the merging of two super-massive black holes (SMBH) is an altogether different kettle of fish, and will result in a serious disturbance to the local gravitational field. 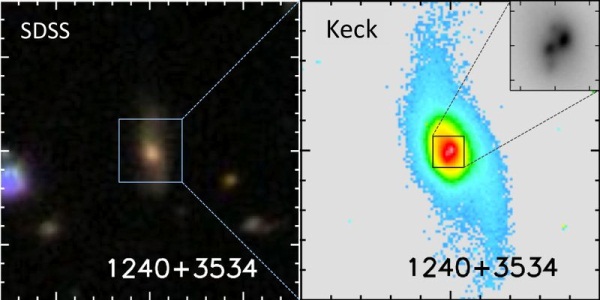 The US observing team took a very close look at 50 active galaxies suspected of containing more than one object at their centre. To get the best image possible, they had to adapt the telescope to compensate for the shimmering effect of the Earth’s atmosphere. The solution was to use the laser-guided-star adaptive optics system in place at Keck, which removes the atmospheric blur, making the images appear as if they were taken from a space telescope. Out of the 50 galaxies observed, they found that 16 had two bright spots at the centre of the galaxy, instead of one, indicating a binary SMBH system. The SMBH’s closest to each other out of the 16 (as shown above) were a mere 2,000 light years apart, which is between 100 and 1,000 times closer than previously known. This discovery is very exiting in that it expands our knowledge and understanding of the formation of large galaxies from smaller ones, and allows us to deduce a better understanding of the evolution of the Universe.